Examples of reasons for intrauterine insemination

Clinics that carry out IUI:s will typically require fertility testing before any IUI is scheduled, in order to determine if an IUI is the most suitable fertility treatment. The woman’s fallopian tubes must for instance be open for an IUI to work. IUI:s are normally not done when the infertility is wholly or partly due to low sperm count or poor-quality sperm. When a woman has mild endometriosis, doing an IUI will not increase her chances of getting pregnant compared with natural attempts. 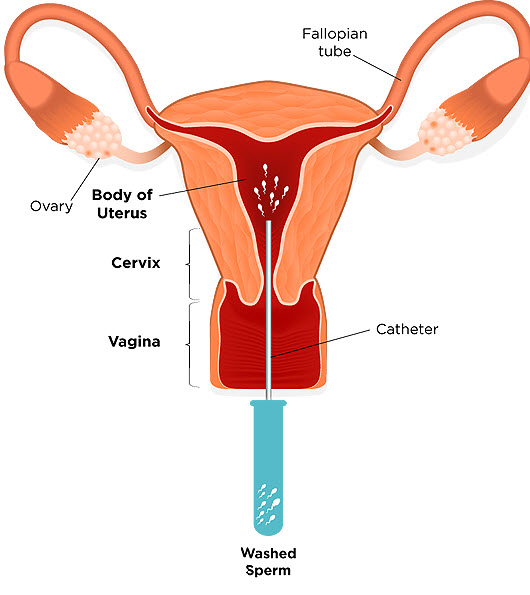 To increase the chance of conception, the intrauterine insemination is typically done right after ovulation.

Exactly when ovulation takes place after a woman’s period can vary a lot between different women, and sometimes even from one cycle to the next for an individual. You might have heard sayings such as “ovulation takes place two weeks after a woman’s period” but this is an oversimplification. An ovulation prediction kit (OPK) can be used to predict the next ovulation. With a standard OPK, urine or saliva is tested for hormonal content. Blood tests will also work to predict ovulation, but are a bit more invasive.

The IUI can be done after a natural (unstimulated) ovulation or after one stimulated by medical treatment.

In the case of a stimulated ovulation, a vaginal utralsound scan is used to track the development of the woman’s eggs, and when an egg is mature a hormon injection is given to stimulate ovulation.

Examples of factors that can impact the chance of success