Endometriosis is a condition where a type of tissue called endometrium grows outside the uterus. Endometrium is supposed to line the uterus, and when it appears in other parts of the body it can cause health problems and infertility issues. In a person with endometriosis, endometrium can for instance grow in the fallopian tubes and in and around the bladder and bowel.

The cause of endometriosis remains unknown. Here are a few examples of possible causes that are currently being explored in research concerning endometriosis. 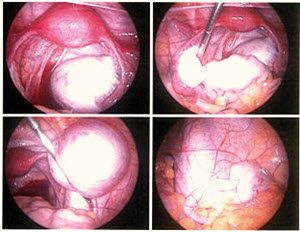 Some of these possible explanations may be overlapping; if endometriosis is related to a problem with the immune system there might be a genetic component causing some people to be more prone to develop this immunological problem, an so on.

Endometriosis chiefly affects girls and women of childbearing age. It does occur in post-menopausal women, but the condition is much more rare in this group.

The strenght of the symptoms can vary a lot between different individuals. Some women with endometriosis develop very bad symptoms that have a large negative impact on their everyday life, while others experience less severe symptoms or hardly any symptoms. Some individuals with endometriosis notice no symptoms at all and the endometriosis is only discovered when the seek medical care for some other condition, e.g. infertility.

Diagnosing endometriosis based on symptoms only is difficult, because there are several other conditions that can cause similar symptoms. You may therefore need to have key hole surgery (laparoscopy) to confirm endometriosis.

There is currently no cure for endometriosis, but there are treatments that may help reduce the symptoms.

One of the complications of endometriosis is decreased fertility. Endometriosis can make it difficult or impossible to get pregnant without medical intervention.

Endometriosis can cause injury to the ovaries or fallopian tubes, and in vitro fertilisation (IVF) can be required. Regrettably, women with endometriosis have a lower chance of getting pregnant with IVF than women without endometriosis.